Apache kafka is synonymous with fast because it is a distributed, highly scalable, fast messaging application used for streaming applications. However, Apache Kafka is not fast in one aspect as it takes a long time to sync the in-sync-replicas using the Kafka’s native replication protocol. These replicas fall out of sync which could be due to a failed broker and then this could slow down or pause producer writes. It is also a huge maintenance task for Kafka administrators to bring the replicas back to sync and if not done this may lead to eventual data loss. Sometimes it can even take days for the replicas to catch up with the leader.

In such cases, the replica.lag.time.max.ms has to be set to a very high value.

There are two ways we can do the Apache Kafka broker replacement:

Using 1 TB of messages,let us see the time comparison between these two different methodologies. We find that Kafka replication takes 181 minutes to sync 1TB of messages whereas using FlashArray snapshots it takes less than a minute to sync the replicas. To test the rapid broker replacement from the failed node, I have created a three-node Apache Kafka cluster. 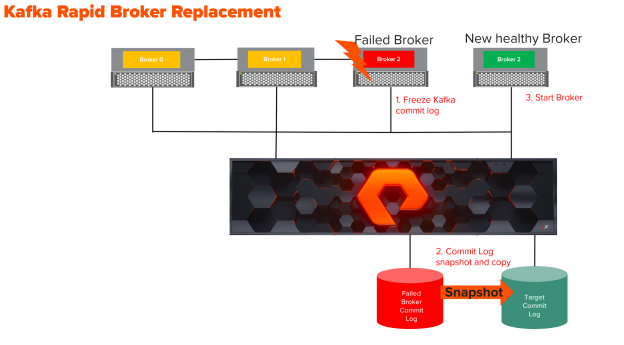 As seen above, the kafka cluster has three brokers 0,1,2. I failed Broker 2 and brought up another healthy node and installed kafka with Broker 2. There is a topic with replication factor 3 on the cluster and it is populated with data.

2. Next step is to take FlashArray//X snapshot. The recommendation is to create a protection group for the Kafka commit logs as shown below. Take the FlashArray snapshot every 5 minutes of all the commit log volumes in the protection group. The snapshots which are older than 1 hour will be removed automatically by setting up retention.

4. Unfreeze the filesystem for kafka commit log volumes. The command is

Start the new Kafka broker to see what happens when we use snapshot and compare it with starting broker without applying snapshot on Kafka commit logs. To illustrate this I have a topic with replication factor set as 3 called test31. I have loaded it with messages and this has an offset as shown below:

Then I started the healthy node broker by applying the snapshot. Remember that we are taking the snapshot every 5 minutes so there will be lesser messages to sync. It has to sync the messages which were added to topic after the snapshot was taken. Let us see the broker logs with snapshot applied to kafka commit logs.

With snapshot: The most recent snapshot of kafka commit logs on the failed broker was taken when the offset was 40557632. As seen below from the broker logs, the ReplicaFetcher thread starts to sync beginning from 40557633 and hence decreases the sync time drastically.

Without snapshot: As seen below from the broker logs, the ReplicaFetcher thread starts to sync from the beginning as the largest offset in the log is -1 and hence it takes more time to sync.

Clearly, it shows that FlashArray//X snapshot process is faster even when data grows or multiplies. Whereas other methodologies(scp or repair) will get even slower if there is more data per node. I would highly recommend using the Pure Storage FlashArray//X snapshots for replacing/recovering failed kafka brokers as it reduces the sync time drastically.