Since the very inception of Pure Storage – we have held the firm belief that innovation in software would be the key to creating the all-flash array category. Almost unapologetically, we marched down the path of delivering value with a scalable, reliable and modular software architecture that featured best-in-class data...

Since the very inception of Pure Storage – we have held the firm belief that innovation in software would be the key to creating the all-flash array category. Almost unapologetically, we marched down the path of delivering value with a scalable, reliable and modular software architecture that featured best-in-class data reduction, and a rich suite of data protection and automation capabilities.

Armed with this richness of software IP riding on industry standard, off-the-shelf hardware componentry, we were able to bring to market, and ultimately define for the industry the recipe for an all-flash array. Over the years we have delivered:

This strategy helped usher in the era of the all-flash storage array, and we believed that getting the software right was the essential pre-requisite to make all-flash arrays ubiquitous in the modern data center.

With software sorted, we naturally decided to push our thinking, and look for the next frontier of innovation, one that could further enhance and augment the value we have delivered thus far.

While our fundamental belief and strategy remains the same and while we realized that even though off-the-shelf industry standard hardware had served us well as a vehicle for getting our product to market quickly, ultimately it wasn’t built specifically for flash, and it was holding-back what our software was capable of. We saw examples in the market of vendors who had done unique innovation around flash-optimized hardware, but generally they treated software like an after-thought, and their dense designs were riddled with compromises, especially around data services, expandability, and serviceability. So we asked ourselves…what was possible if we married best-of-breed flash software with custom all-flash hardware, and optimized end-to-end? What if you could get hardware-optimized performance and density, and marry that with expandability, serviceability, and rich software capabilities in one package, all fitting inside a diminutive appliance-like footprint? Two years ago, we began the FlashArray//m project by hiring the best minds in the industry, people with proven track records of delivering high performance data center infrastructure platforms in compute, storage and networking. But hiring people was only the first part of this solution. We also realized that in order to be successful in this endeavor, we also needed world-class partners, so we recruited the leading technology component suppliers and contract manufacturing partners in the world.

And as a culmination of that effort, today we are proud to introduce FlashArray//m: the first all-flash array that marries best-of-breed software innovation with 100% flash-optimized hardware, and delivers it all in fully-modular, expandable, and upgradable chassis-based architecture. 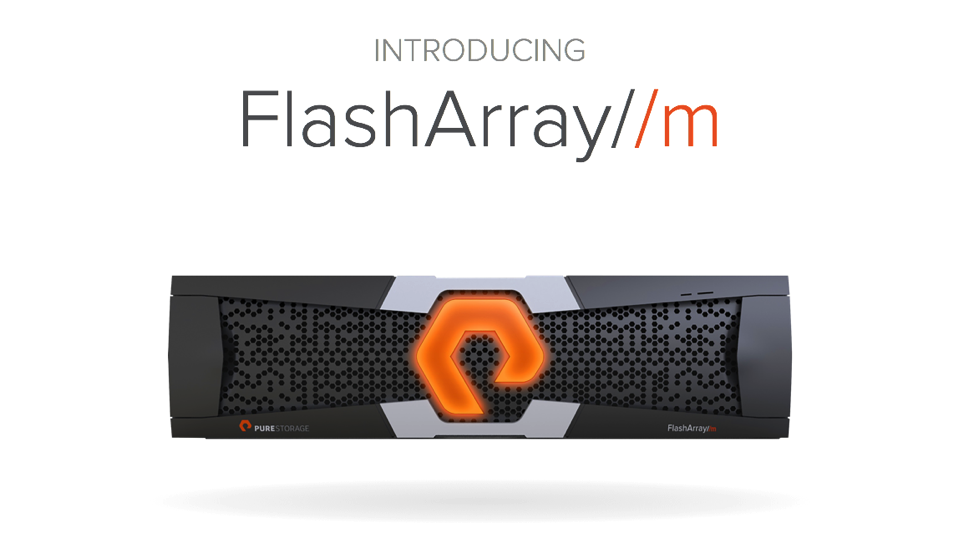 But before we dive deeper into the FlashArray//m, lets first consider the 3 design goals we had at the outset of this project:

We’d love for you to meet some of the engineers behind FlashArray//m and hear their vision for the product:

So what does the //m stand for, you (and everyone) asks?

An integrated, fully functional, high performance storage array that scales from 15TB up to 120TB usable in it’s diminutive 3RU base chassis, and even larger outside the chassis. It achieves high levels of density, thanks to the combination of purpose-built controllers, dual-density flash modules, and our industry-leading FlashReduce data reduction software. The //m represents a 2.6x improvement in density over our FA-400 series which was already an order of magnitude more dense than the Tier 1 disk it commonly replaces. But space density isn’t the only thing mini about it. It consumes about 1 kW of power, about the same as a common toaster oven (to put things in perspective, a Tier 1 disk array can consume as much electricity as required to power 10 houses). That results in a 2.3x lower power footprint compared to our own FA-400 – which again as you remember was up to 10x improvement over Tier 1 disk…remarkable indeed.

Capable of delivering up to 300,000 32K IOPS and 9 GB/sec bandwidth at consistent < 1 msec latency, the FlashArray//m is approximately 50% higher performance compared to the FlashArray 400 Series. The //m packs up to 64 high-end Intel Haswell cores, 100s of hardware threads, up to 1 TB of ultra high speed DDR4 memory and a high speed PCIe interconnect between the controllers. In addition, with the introduction of //m we are also introducing our own custom-design NV-RAM Modules. These NV-RAM modules are now part of the base chassis itself and come in mirrored packs of 2 or 4 depending on the model. And as the name suggests, these are real DRAM modules backed by super capacitors to protect against data loss during power failure. These NV-RAM modules sit on the controller’s PCIe bus itself (and not behind a SAS link), communicating over the NVMe protocol. Think of all your writes ending on DRAM on the PCIe bus before being acknowledged to the host. Think screaming performance. And did we mention that these are all hot pluggable and dual ported to both controllers? That last bit – dual ported hot-plug NVMe – deserves a separate blog unto itself. Now marry all of the above with Purity’s FlashCare software (which optimizes IOs for MLC flash by using variable block size processing delivering consistent performance for all mixed workloads with no tuning needed), what you get is a mini array that packs a mighty punch in performance, and 50% improvement over our current generation: Although impressively dense, the FlashArray//m doesn’t sacrifice expandability and upgradability. It can expand from 15TB usable to 120TB inside the chassis, and to nearly ½ PB of usable storage by adding additional external storage shelves, non-disruptively. Every component of the //m is hot pluggable, and can be serviced in the field, non-disruptively and online without downtime or performance degradation. There are three controller options, which allow customers to upgrade performance as their needs grow. Flash Modules fit in both the base chassis and expansion shelves, and can be mixed and matched over time as higher-density modules are shipped. And as always, all this comes together with the FlashProtect software which provides high availability, dual-parity RAID-HA protection and flash management at a system level, enabling all these modular upgrades to happen online and without planned downtime. This modular scale enables existing customers to upgrade to the //m, and then to move between //m controller models as performance and capacity needs evolve. Upgrade Flex bundles make this economically-feasible as well, giving trade-in value for old controllers when purchasing a capacity and controller expansion): The FlashArray already distinguishes itself with simplicity, but with the FlashArray//m we can extend that leadership by engineering simplicity into the hardware itself. The integrated chassis delivers a single-component install, with only 6 cables to connect (2 for power, 2 for management, and 2 or more for host connectivity). Upgrades are simple – just slide out the old module and slide in the new. All the Purity Operating Environment software is built-in and included in the base price, no need for external management, virtualization, or disaster recovery appliances and software. And finally, we work hard to make the experience worry-free: performance through failures, upgrades, and online replacement of all parts. And to top it all, today it also comes with a revolutionary, cloud-based management and support experience, Pure1, which you can read about here.

When Can I Get One?

Since the FlashArray//m represents our first in-house hardware design, we’ve embarked upon our largest beta program ever to validate it in real customer environments. The //m has been in beta since Q1 of this year, and is expected to enter Directed Availability in July where those beta customers and new customers can deploy the //m for fully-supported production workloads. The //m is expected to be in full-volume GA shipments by Q3.

Don’t want to wait to get started with FlashArray? You don’t have to. With the //m introduction Pure is also introducing a FlashArray//m Upgrade Assurance promotion, which allows customers to buy a FlashArray 400-Series array to meet their needs now, and receive a free upgrade to the //m when it hits GA as part of their next qualifying capacity expansion. And this promotion is backwards-compatible to anyone who has purchased a FA-400 array since February 1st of this year. Read more about the FlashArray//m Upgrade Assurance promotion in a subsequent blog.

Software and hardware innovation together as one, in the new FlashArray//m. Come experience the FlashArray//m for yourself, we bet that mini, mighty, modular, and meaningful simplicity will forever change what you expect out of Tier 1 storage.

Upgrade Flex bundles are subject to modification or discontinuation.